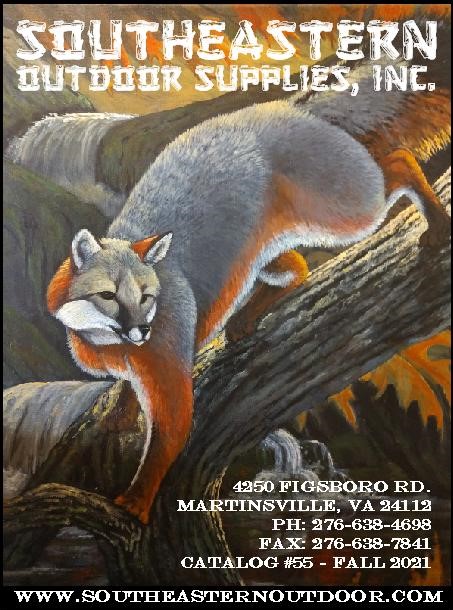 Click Here to Request Our Catalog Through the Mail.

Southeastern Outdoor Supplies, Inc. is a family ran corporation established in 1966 by patriarch John Hundley. John took an interest in trapping while in high school in the 50's and frequently placed orders for his personal supplies from vendors listed in Fur-Fish-Game Magazine. After getting married and starting a family while in his 20's, he decided to try his hand in mail order. With a few hundred dollars, he printed his first catalog and placed an advertisement in Fur-Fish-Game offering his catalog. He then operated the business from his home for the next five years before outgrowing the space. After outgrowing his next few buildings in the 70's and 80's he landed where the business operates from now. Since then, we have printed a catalog every year for the last 51 years and supplied trappers and outdoorsmen all over the continent with quality supplies.

Southeastern Outdoor Supplies, Inc. is located in the foothills of the Blue Ridge Mountains of South Central Virginia in Martinsville, home of the famous NASCAR circuit Martinsville Speedway. In addition to the mail order portion of the business, we also have a retail showroom and we encourage you to stop by to see the operation. We are a full line archery pro shop, firearms dealer and ginseng/fur buyers. After being in the industry for over 50 years, we are very knowledgeable about supplies that the hunter and trapper needs. We keep a large inventory at all times and we pride ourselves in our prompt service. Mr. Hundley and family would like to thank all of our loyal customers for their continued patronage and support.